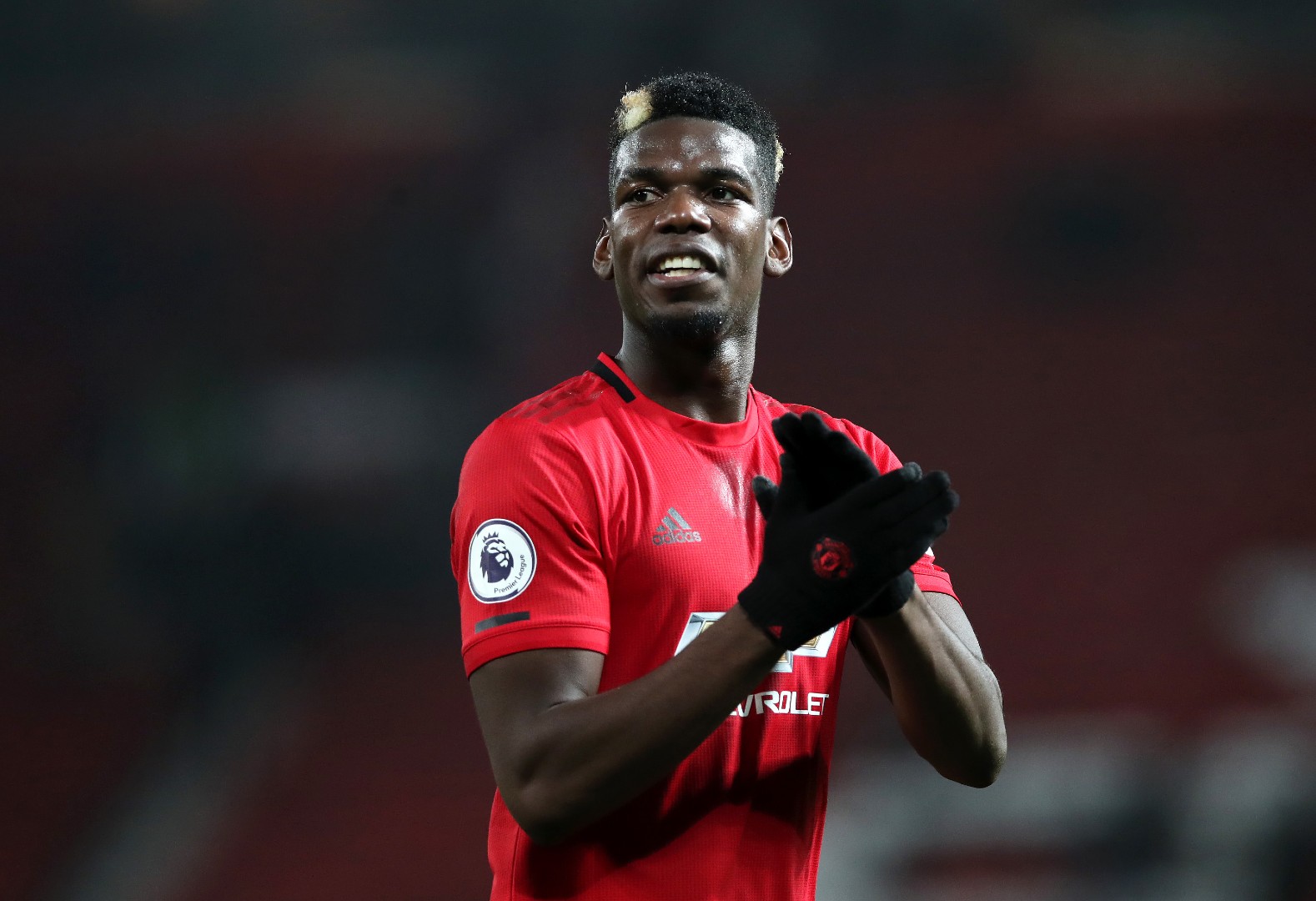 Real Madrid have finally pulled out of the race to sign Manchester United star, Paul Pogba, on a free transfer next summer.

Marca reports that Real Madrid made the decision they believe Pogba would not fit into their current squad.

The report added that Real Madrid’s priority is instead directed towards improving in other areas of the pitch, while also trying to tie down veteran midfielder Luka Modric to a new contract.

Pogba has been heavily linked with a move to Real Madrid in the past, with former Los Blancos manager, Zinedine Zidane, urging the club’s board to sign him on several occasions.

The 28-year-old is set to leave Man United when his current contract runs out at the end of the 2021/22 season.

The France international is free to sign a pre-contract agreement with foreign clubs from January 1, 2022.

Pogba, who is understood to be holding out for a salary rise which would see him overtake Cristiano Ronaldo as Man United’s highest-paid player in the Premier League, has also been linked with Juventus, Paris Saint-Germain and Barcelona in the past.

The midfielder is currently sidelined with a thigh injury he sustained on international duty with France.

Pogba is expected to return to action for Man United in January.

Last month, Barcelonaheld a meeting with the player’s agent Mino Raiola while Dortmund recently confirmed that Real Madrid are among those who are interested in signing the Norwegian.

Barca president Joan Laporta’s reported confidence on signing the striker has sparked off what has been described as a ‘war’ between the club and El Clasico rivals Madrid – who have emerged as favourites to land the striker.

The Norwegian fuelled speculation of a transfer to La Liga earlier this month as he confirmed his desire to play in La Liga during his career.

Manchester United are said to have ended their interest in landing the superstar striker this year as a host of clubs circle around the player’s future.

Real Madrid are favourites to land the Scandinavian to complement their plan to sign Paris Saint-Germain striker Kylian Mbappe this summer.

Mbappe is out of contract in the French capital this summer and has been allowed to negotiate a pre-contract agreement with clubs outside of France since the start of the month.

The fact that Los Blancos would not have to pay a transfer fee for the signing of the France international would allow them to not only offer a lucrative wage and signing-on package, along with agent fees, but to finance a move for Haaland too.

The 22-year-old has already established his status as a world class striker with a strike rate of better than a goal per game for Dortmund, netting 78 goals in 77 appearances since his switch from Red Bull Salzburg two years ago.

The details of Real Madrid’s intentions have been outlined by Marca, who detail how the entire cost of such an operation would be a whopping £292million.

That includes the £63million transfer fee – thought to be a release clause that kicks in this summer at Dortmund – alongside the player’s wages and the commission that would be demanded by Haaland’s agent Raiola.

It is reported that the Norwegian striker’s representative will push for him penning an extensive six-year contract at his next club, with the sizable wage packet being spread over the course of such a commitment.

“The only thing I know is that Real Madrid are very interested in his signing.

“I could name you other 25 teams, but I know for a fact that Madrid are interested.”

Rafa Benitez has spoken out after his sacking as Everton manager, blaming injuries and the club’s financial difficulties for his failure in the hot-seat.

The Spanish coach was axed on Sunday, less than 24 hours after his side were beaten 2-1 by bottom club Norwich City.

It was the Toffees’ 10th Premier League defeat of the season and the weekend’s results leave them 16th in the table.

They had won just one of their last 13 matches and the Everton board called an emergency meeting on Saturday evening, where they come to a decision to sack Benitez after just six months in charge.

But Benitez took aim at the lack of “patience” in the modern football industry as he penned a letter to Everton fans following his dismissal.

“We knew it wouldn’t be easy, and that it was a big challenge, both emotionally and in terms of sport,” Benitez wrote

“My love for this city, for Merseyside and its people, made me accept this challenge, but it is only when you are inside that you realise the magnitude of the task.

“From the very first day, my staff and myself worked as we always do, with commitment and full dedication, we didn’t only have to get results, but we also had to win over people’s hearts.

“However, the financial situation and then the injuries that followed made things even harder.

He continued: “The road to success isn’t easy and sadly, nowadays in football there is a search for immediate results and there is always less and less patience; unfortunately circumstances have determined the result and it won’t be possible to continue this project.

“In any case, thank you to the Board, to the staff, to the players, and to those fans who have supported us during this time.

“My best wishes for EFC.”

Benitez was an unpopular choice for the role given his links with Everton’s Merseyside rivals Liverpool, whose fans chanted their former manager’s name around Anfield during their clash with Brentford upon learning of his sacking.

He started well at Goodison Park, however, winning four of his first five matches charge as Everton went unbeaten in the opening stages of the campaign.

But the wheels began coming off for Benitez and Farhas Moshiri’s project after Everton were beaten 5-2 at home to Watford at the end of October.

Everton collected just five points since with Benitez at the helm, and defeat to Norwich proved to be the final straw.

The club announced the news of Benitez’s departure on their website with a brief statement, which read: “Everton Football Club can confirm the departure of Rafael Benitez as First Team manager.

“Benitez, who joined Everton in June 2021, has left the Club with immediate effect.

Djokovic flies out of Australia after losing court appeal

Tennis superstar Novak Djokovic flew out of Australia on Sunday after a court upheld the government’s decision to cancel his visa, capping days of drama over the country’s COVID-19 entry rules and his unvaccinated status.

The unanimous ruling by a three-judge Federal Court bench dealt a final blow to Djokovic’s hopes of chasing a record 21st Grand Slam win at the Australian Open that starts on Monday.

The Serbian player went to the airport in Melbourne just hours later. Federal agents escorted him and his team from the business lounge to the gate, where he boarded an Emirates flight bound for Dubai. The flight took off shortly before 11 p.m. (1200 GMT).

In a rollercoaster ride, the world’s top men’s player was first detained by immigration authorities on Jan. 6, ordered released by a court on Jan. 10 and then detained on Saturday again pending Sunday’s court hearing.

Djokovic said after the ruling he was extremely disappointed as it meant he could not take part in the tournament.

“I respect the Court’s ruling and I will cooperate with the relevant authorities in relation to my departure from the country,” he said in a statement and wished the tournament well.

Djokovic, 34, had appealed against Immigration Minister Alex Hawke’s use of discretionary powers to cancel his visa. The minister had said Djokovic could be a threat to public order because his presence would encourage anti-vaccination sentiment amidst Australia’s worst coronavirus outbreak.

Chief Justice James Allsop said the court ruling was based on the lawfulness and legality of the minister’s decision in the context of the three grounds of appeal Djokovic’s legal team lodged.

“It is no part of the function of the court to decide upon the merits or wisdom of the decision,” Allsop said, adding that the three judges were unanimous in their ruling. The full reasoning behind the ruling would be released in the coming days, he said.

‘Keep borders strong’
The player’s visa saga has dominated headlines around the world and fuelled a debate over the rights of people who opt to remain unvaccinated as governments take measures to protect their people from the two-year coronavirus pandemic.

The controversy became a political touchstone for Prime Minister Scott Morrison as he prepares for an election due by May. His government has faced criticism for its handling of Djokovic’s visa application.

“It’s now time to get on with the Australian Open and get back to enjoying tennis over the summer,” he said in a statement.

Djokovic had been granted a visa to enter Australia, with a COVID-19 infection on Dec. 16 providing the basis for a medical exemption from Australia’s requirements that all visitors be vaccinated. The exemption was organized through Tennis Australia.

That exemption prompted widespread anger in Australia, which has undergone some of the world’s toughest Covid-19 lockdowns and where more than 90% of adults are vaccinated. The government said recent infection alone did not meet its standards for an exemption.

Weeping fans
But the player also had some support, especially in his native Serbia and from Serbians living in Australia.

Serbian Prime Minister Ana Brnabic said on Sunday, “I think that the court decision is scandalous, I am disappointed, I think it demonstrated how the rule of law is functioning or better to say not functioning in some other countries.” read more

In the Serbian capital Belgrade, Djokovic’s hometown, many support him although some felt he should have been vaccinated.

“I think Australia should be ashamed of itself and that the decision was not a just one. I am sorry for Novak as a tennis player and as a person,” said Danilo Mircic, a student.

“If I were him, I would get vaccinated and avoid problems in the future,” said Aleksandar Janjic, a middle-aged computer programmer. read more

In Melbourne, around 70 Djokovic fans, including young children, sang folk songs and chanted in the Federal Court plaza while they waited for the court’s ruling.

They gathered around a loudspeaker to hear the judge reading out the decision, but it took several minutes after the court adjourned before they worked out that Djokovic had lost. Two women were weeping, while others started up chants for a short while before the crowd dispersed.

“What they did today is everything except justice,” said Natasha Marjnovic, 44, a Djokovic supporter who was wiping away tears. “They killed a beautiful sportsman and his career and for all of us who love tennis.”

It added in a statement that decisions of legal authorities regarding public health must be respected. read more

On the tennis circuit, fellow players had become impatient for the media circus around Djokovic to end as it had become an unwelcome distraction, casting uncertainty over the draw for the tournament.

But several voiced sympathy for Djokovic following his legal defeat.

“There was a political agenda at play here with the elections coming up which couldn’t be more obvious,” Vasek Pospisil, a Canadian tennis player, said on Twitter.

“This is not his fault.”