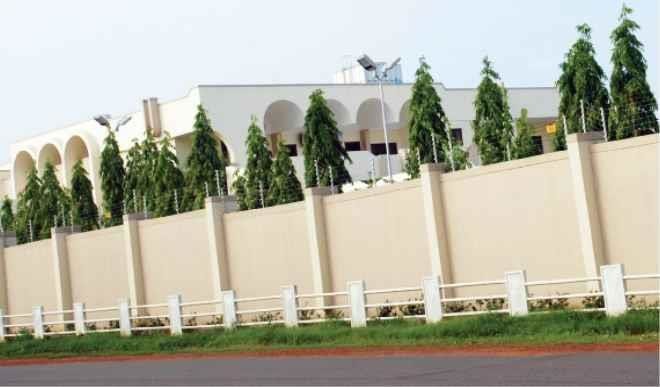 A combined team of security agents as well as officials of the anti-graft agency, ICPC, have raided the residence of former Vice president Namadi Sambo in Kaduna.

The operation took place on Wednesday by a team made up of the police and agents of the Department of State Security (DSS) and the ICPC.

The former vice president’s residence at Gobarau road, Kaduna was raided twice early in the year.

Yesterday, the operatives arrived at the expansive residence of the former vice president at No. 1 Alimi Road, GRA, Kaduna, a few minutes after 3pm.

They stayed inside the premises till around 5:30 pm.

They were heavily armed and came in three vehicles: A white coloured Coaster bus, a Toyota Hilux van and a dark coloured Toyota Corolla car.

The white bus had an eagle insignia on it but with no inscription identifying which of the agencies it belonged to.

The Corolla was parked outside as the operatives numbering up to ten conducted the search within the residence while the others waited outside.

While the search lasted, the main road leading to Alimi road were blocked and vehicles were not allowed to pass as they were turned away by police men stationed at main entrance leading to the house.

A source around the house confirmed the presence of security operatives but said he was not sure whether they were from the EFCC or ICPC. He confirmed that some of the operatives were men of the Special Anti Robbery Squad (SARS) because of their uniforms.

He said the operatives on arrival at the house asked all the people in the house to remain where they were threatening to shoot if they noticed any unwarranted movement.

He said the entire place was calm as the search lasted and that it was the heavy presence of uniformed men at the gate and on the road that indicated that something unusual was going on.

The source said when the bus came out of the house it was escorted by the two vehicles with the well-armed men.

A source within the ICPC office in Kaduna told our correspondent that their men had gone out on certain operation when contacted.

Spokesman of the former Vice President, Malam Umar Sani confirmed the development in a phone interview.

He said the ICPC officials came with a court order to search the place.

“This is not the first time they are searching the house. They have been coming to search the house on several occasions.

“Today they came with a court order and gave a copy of the court order to the CSO (Chief Security Officer) in the house.

“After they finished the search, they wrote at the back page of the court order that they gave to the CSO that they didn’t find anything and they left. “So we are not surprised because it has now become a routine activity.”

Acting spokesperson for the Kaduna police Command, ASP MD Muhammad when contacted said he could not talk at that moment as they were receiving some visitors. He promised to call back, but did not do so as at the time of filing this report.

Authorities of the 7 Division Nigerian Army, Maiduguri, have withheld the salaries of 45 soldiers, according to sources.

The soldiers, who were among the 149 troops of the 153 Task Force Battalion withdrawn from Marte, Borno State, after spending three years in counterinsurgency operations, were accused of for abandoning their duty posts.

The battalion came under attack on three occasions during which several soldiers were killed while a range of weapons, equipment and vehicles were either carted away or destroyed.

The battalion was overhauled after the last attack in February.

A source said necessary changes were made and troops who served with the battalion were moved to different formations in Maiduguri before a new deployment was made.

“Some of the soldiers who were not seen at their new units were believed to have gone on AWOL (Absence Without Leave). Their salaries accounts were not credited in April,” he said.

But one of the affected soldiers said the allegation of desertion against them was untrue.

“We were not given our salaries and when we asked our supervisors in the 7 Division, we were shocked to hear that we had forfeited all our entitlements over desertion.”

Attempts to get the response of army authorities were not successful.

EFCC goes after top officials of PDP over N10bn scandal

The Economic and Financial Crime Commission (EFCC) has invited officials of People’s Democratic Party (PDP) for questioning over alleged criminal conspiracy, abuse of office, diversion of funds and fraud.

This is coming barely a month after a chieftain in the PDP, Kazeem Afegbua, petitioned the anti-graft agency to scrutinise the Secondus-led National Working Committee on financial misappropriation.

In the letter of invitation dated May 17, 2021, and addressed to the Prince Uche Secondus, the EFCC said the need to obtain certain clarification from the party has become imperative.

The agency, however, requested the party’s National chairman to release the National Auditor, National Organising Secretary and Director of Finance to report at the EFCC headquarters from May 19th to 21st 2021.

The agency also requested the national officers to honor the invitation with relevant documents relating to sole of forms into the party’s elective positions from January 2017 to date.

Kazeem had in his petition alleged that much of the financial transactions of the PDP under Prince Uche Secondus has been shrouded in mystery, accusing the leadership of deliberate attempt to shortchange the party in the build up to the 2023 general elections.

However, Secondus had since denied the allegation and filed a N1 billion suit against the petitioner, Kazeem Afegbua.

The National Agency for Food and Drug Administration and Control (NAFDAC), has granted approval for the conditional emergency use of Janssen COVID-19 vaccine in Nigeria.

Janssen COVID-19 vaccine is the third vaccine recommended for administration in the country.

The director-general of NAFDAC, Prof. Mojiola Adeyeye, in a statement on Tuesday, said information on the vaccine shows it met the criteria for efficacy, safety and quality.

“The Phase III clinical trial involved over 44,000 people. Half received a single dose of the vaccine and half were given placebo (a dummy injection). People did not know if they had been given Janssen COVID-19 Vaccine or placebo.

According to her, the trial showed a 67 per cent reduction in the number of symptomatic COVID-19 cases after two weeks in people who received Janssen COVID-19 Vaccine.

On the vaccine safety, Adeyeye said NAFDAC, in line with its pharmacovigilance and safety monitoring plan for COVID-19 vaccines, will closely monitor and subject the Janssen COVID-19 Vaccine to several activities that apply specifically to COVID-19 vaccines.

The AstraZeneca vaccine which Nigeria has been giving out has garnered many sceptics internationally after some recipients of the vaccine died.

At least 16 countries including Germany, France and Sweden have suspended the use of AstraZeneca, which put on the Nigerian government to suspend it.