Thursday night was a low point in the managerial career of Jose Mourinho as his Roma crashed to a humiliating 6-1 defeat against Bodo/Glimt.

Mourinho’s side were strong favourites going into the Europa Conference League encounter but were humbled by the Scandinavian hosts, who blew them away in the second half.

It was the first match of Mourinho’s entire managerial career – which has spanned over 1,000 matches – that he had overseen his side concede six goals or more in one match.

That it came against a team who had significantly fewer resources than his own and were huge outsiders for the match, made it all the more painful.

Striker Erik Botheim and midfielder Patrick Berg had given Bodoe/Glimt a two-goal advantage in the first half, but Carles Perez pulled one back for Roma – who were then expected to launch a fighting comeback.

Instead, the Italian side collapsed in the second half as Botheim added two more goals to complete his hat-trick while goals from Amahl Pellegrino and Ola Solbakken piled the misery on the visiting team.

The Portuguese boss was predictably in an awful mood after the defeat and did not hold back on his criticism of the players that he selected for Roma.

Mourinho explained on Sky Italy: “The initial XI of today of Bodo Glimt had better quality than us. Now you can stop asking why we play always the same players.

“I did it with good intentions, to give an opportunity to those who work hard and to rotate the squad on a synthetic pitch in cold weather. I decided to rest many players.

“If I could always play with the same XI, then I would. It’s risky, because we have a huge gap in quality between the two groups of players.

“I knew the limits of this squad, it is not new to me, but I still expected a better response.

“As I said, it’s my choice to play them, so my responsibility.”

This is the same excuse that the Portuguese boss used during his tenure at Old Trafford, when he claimed that a poor loss for United away against Brighton actually vindicated his approach.

The trip to the South Coast saw United without their regular striker Romelu Lukaku, who was injured for the game having been a virtual ever-present for the side in attack over the course of that season.

Lukaku has played the entire 90 minutes in 30 Premier League games that season to indicate how not only was he preferred in attack over others, but that he was never rested in matches.

Instead, Marcus Rashford and Anthony Martial were given rare starts under Mourinho but the side went down to a 1-0 defeat, leaving the manager to aim a thinly-veiled dig at the two forwards.

He suggested that neither of those players deserved to be in the strongest side at United and their performances were the reason why he did not trust them above the Belgian striker. 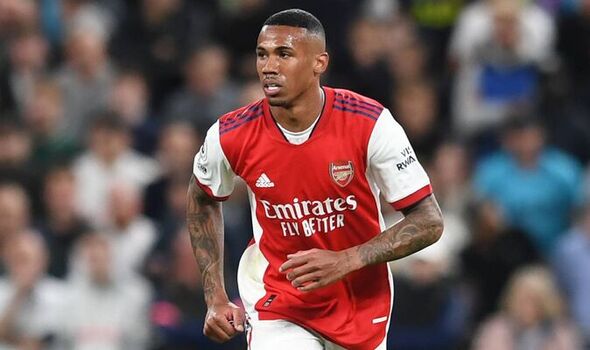 Juventus are so desperate to land defender, Gabriel Magalhaes this summer and will offer Arsenal three players, according to Corriere dello Sport.

The Old Lady have identified Gabriel as a possible successor to Giorgio Chiellini, who will leave Turin this summer, and are keen to reach a quick agreement with Arsenal.

It is understood that the three players Juventus will offer Arsenal to force the deal for their 24-year-old centre-back are Arthur Melo, Weston McKennie and Moise Kean.

The report added that Juventus sporting director Federico Cherubini has travelled to London for talks with Arsenal over a deal for Gabriel.

Juventus are in the market to replace Chiellini, who is leaving the Serie A giants this summer after 17 years.

However, it’s claimed that Arsenal are demanding at least £42.4million for Gabriel.

Gabriel joined the Gunners from Lille in a £27million deal in 2020.

Manchester United have made it clear to Barcelona, they will not meet their £70 million asking price for Frenkie De Jong, according to Daily Mail.

The Premier League side are keen on signing De Jong, as Paul Pogba is set to leave on a free transfer this summer.

The Barca midfielder has already been identified by incoming manager, Erik Ten Hag, as a potential option having already managed him at Ajax.

Barcelona are open to a deal, as they are also seeking funds to put together a deal for Bayern Munich striker Robert Lewandowski.

However, United have informed the LaLiga club that they do not want to spend a significant part of their summer budget on signing De Jong.

Barca are looking to recoup the £65 million they spent on signing the 25-year-old from Ajax in 2019.

Aubameyang has decided to focus on his club career.

In a letter to the Gabonese FA, Aubameyang wrote, according to Mundo Deportivo: “After 13 [thirteen] years of pride in representing my country, I announce that I’m ending my international career.

“I would like to thank the Gabonese people and all those who have supported me in the good and the bad times.

“Sharing it with all the people was an unforgettable moment. I thank our President, his Excellency Ali Bongo Ondimba who has always supported the Panthers and has always worked for football to evolve in our country.

“I would also like to thank all my coaches, staff and the players that I have come across during this career.

“Finally, I thank my father who gave me the desire to do like him, hoping to have made him proud by wearing our colours.”