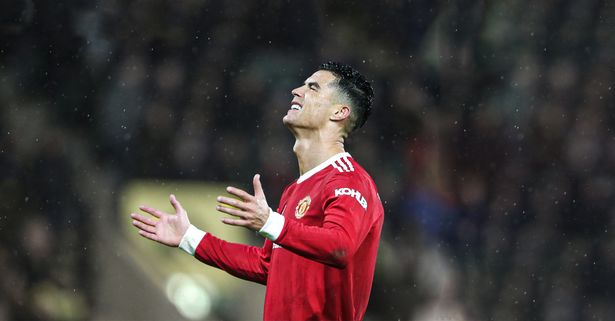 Cristiano Ronaldo has sent a pointed message to the Manchester United dressing room, admitting he is not happy and that now must be the turning point.

The 36-year-old is back in England for the first time in a decade, having completed an emotional Old Trafford return at the end of the summer window.

And individually, the move has gone swimmingly, scoring 14 times in 20 appearances since leaving Juventus.

But collectively United have struggled, with Ole Gunnar Solskjaer losing his job after a torrid run of form in November.

Ralf Rangnick has since come in and steadied the ship, but it looks like a season of battling for the top four, rather than the title chase Ronaldo envisioned.

And the Portuguese icon revealed that 2021 had been a difficult year with the upheaval of moving clubs and the difficulties his new side have faced on the pitch.

“2021 is coming to an end and it was far from being an easy year, despite my 47 goals scored across all competitions,” he wrote on Instagram.

“At Juventus, I was proud to win the Italian Cup and the Italian Supercup, and become the Série A Top Scorer.

“For Portugal, becoming the Euro Top Scorer was also a high point this year. And of course, my return to Old Trafford will always be one of the most iconic moments in my career.

“But I’m not happy with what we are achieving in Man. United. None of us are happy, I’m sure of that.

“We know that we have to work harder, play better and deliver way more than we are delivering right now.”

Ronaldo then urged his team-mates to use the new year as the perfect opportunity to start afresh and right the wrongs from the first half of the campaign.

He continued: “Let’s make this New Year’s Eve a turning point of the season! Let’s embrace 2022 with a higher spirit and a stronger mentality.

“Let’s take us above and beyond, let’s reach for the stars and put this club right where it belongs!

“Join us, we’re counting on all of you! Happy New Year and see you soon!”

Ronaldo and his Red Devil team-mates will be back in action on January 3, when they take on Wolves at Old Trafford, before a full week off gives Rangnick valuable time on the Carrington training pitches.

Four people have been arrested after disorder in the West Ham section of Old Trafford on Saturday afternoon.

The Hammers suffered a 1-0 defeat against Manchester United after a late Marcus Rashford goal.

Footage later surfaced showing disorder in the away end with West Ham investigating the reports of trouble.

And Greater Manchester Police confirmed to Sky Sports News that four arrests have been made, including a 33-year-old on suspicion of assaulting an emergency worker.

A 21-year-old man was also arrested on suspicion of drunk and disorderly behaviour, possession of cocaine and common assault.

Greater Manchester Police added: “Two other men were detained and will be summonsed at a later date for football-related offences.”

West Ham felt hard done by after their narrow defeat, with some question marks over whether Rashford’s winner should have been ruled out for offside.

Speaking after the game, Hammers manager David Moyes said of the goal: ” I’ve not seen it again, by all accounts everyone seems to think it’s fine so we have to trust VAR that they’re getting decisions right.”

Discussing the game, he added: “I just see it as them having a strong squad. I didn’t think them bringing them on made it that much different,” he said.

“We defended well enough but we completely switched off, we didn’t do things you learn as a young player when trying to see games out.

“We had a good defensive organisation but we lacked what we’ve had in recent weeks, our attacking play wasn’t at the level. There was a lot of good things about it but the result is the key thing.

“I’m not coming to these games to roll over and lose, I’m really disappointed with the result but really pleased with how the players have performed.

“For long parts today I was pleased with them, defensively rather than our attacking play. We’ve moved up a level or two over the last year, I’m enjoying it but that result today was hard to take.”

Pep Guardiola will be offered the chance to take Total Football back home when he decides to leave Manchester City – by becoming manager of Holland.

The KNVB (Dutch FA) have drawn up plans to convince the City boss that he should realise his dream of becoming an international coach with the Oranje once his Etihad reign comes to an end.

Guardiola, 51, has a contract with City that expires in the summer of 2023.

And the Premier League champions are hoping the Catalan can be persuaded to extend his stay in Manchester even further.

The Dutch sounded out Guardiola about his future plans before he signed a new two-year extension with City last August.

They were told that the former Barcelona and Bayern Munich boss had unfinished business with the Blues.

But a future link-up was not discounted.

Guardiola is represented by his brother, Pere, who recently joined forces with influential Dutch agency SEG.

He has made no secret that he harbours an ambition to manage a top international nation.

And the prospect of taking charge of the country of his mentor Johan Cruyff would be tantalising given it was Holland’s brilliant team of the 1970s that introduced Total Football to the world.

Cruyff brought Guardiola through from Barcelona’s youth team to play as a deep-lying midfielder in the team that won the club’s first Champions League in 1992.

The late Dutchman’s influence on the City boss is so profound that Guardiola once said: “I knew nothing about football before knowing Cruyff.”

His coaching beliefs have been shaped by the Total Football philosophy that had Cruyff at its heart when Holland reached the 1974 World Cup final before losing to West Germany.

The KNVB turned to 70-year-old Louis van Gaal for a third time after sacking Frank de Boer in the summer following a disappointing Euros. 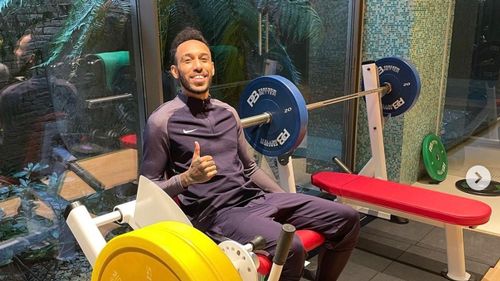 The Arsenal forward was away at AFCON with Gabon when he experienced some heart issues.

A scan revealed possible issues after Aubameyang tested positive for Covid 19 in the lead up to the tournament.

The Gunners recalled the 32-year-old, who is currently not being selected by Mikel Arteta following a disciplinary breach.

Aubameyang has taken to social media to share that he is “completely healthy” following further tests.

He said on Instagram : “Hi guys, I came back to London to do some additional checks, and I’m very happy to say that my heart is absolutely fine and I’m completely healthy!! Really appreciate all the messages over the last few days and I’m already back at it”

Gabon boss Patrice Neveu revealed that Arsenal were keen to get their player back once news of his possible issues broke.

He said, as quoted by Sky Sports : “What I know is that they’ve been Covid free for the last 72 hours. We couldn’t arrange an MRI for them, and as a result they couldn’t train.

“It was really annoying for them to stay in their rooms. We made the decision yesterday with the President and under pressure from the clubs too, because they’re worried so that [Aubameyang] should go back to Arsenal and Mario [Lemina] back to Nice.”

Despite Mikel Arteta’s recent shunning of the forward, Neveu did admit that it was the club’s right to recall their player.

Aubameyang is currently out of the first team picture as his future remains up in the air.