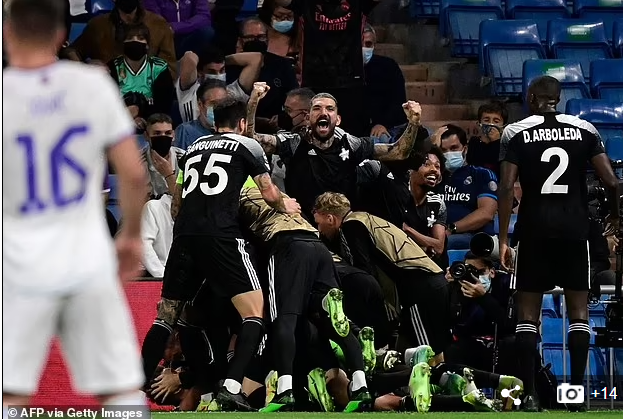 Jasurbek Yakhshiboev headed the visitors in front with a free header at the back post before Karim Benzema restored parity from the spot in the second half after Vinicius Junior was impeded.

Real missed chances to take the lead before Thill’s thumping left-foot drive secured the win for the visitors.

It was the David vs Goliath fixture that had everyone whispering, what if the competition debutants do it again?And in the opening exchanges seemed to suggest no, as the thirteen time European Champion took control of the game and produced a series of decent chances through Karim Benzema.

But with a quarter of an hour gone the visitors produced a sucker punch that silenced the home crowd. Cristiano was given too much space down the left flank, which allowed him the time to deliver a perfect cross into the box which found Jasurbek Yakhshiboev who headed the ball past Thibaut Courtois.

Sheriff relied heavily on their keeper Giorgos Athanasiadis to keep them in the game as he made a collection of excellent saves.

The second half saw Madrid continue to turn the screw on the visitors and they eventually won a penalty through Vinícius Júnior who was deemed to be brought down inside the box by Edmund Addo.

Up stepped Benzema who dispatched the spot kick perfectly to not only level the scoreline but also became the competition’s fourth-highest scorer outright.

The game continued to produce plenty of drama as substitute Bruno had the ball in the back net for Sheriff, only for it to be called offside after a lengthy VAR check.

Late on Thill’s stunning strike took the win for Sheriff in a moment of footballing history.

Next up for Madrid is an away trip to Espanol in the league while Sheriff Tiraspol also return to domestic action against Milsami.

American artistic swimmer Anita Alvarez was in danger of drowning after losing consciousness in the pool at the world championships in Budapest before being rescued by her coach Andrea Fuentes.

Spaniard Fuentes, a four-time Olympic medalist in synchronized swimming, jumped into the pool after she saw Alvarez sink to the bottom at the end of her solo free final routine.

She was given medical attention beside the pool before being taken away on a stretcher.

It was the second time Fuentes has had to rescue Alvarez after she leapt into the pool during an Olympic qualification event last year and pulled her to safety along with the American’s swim partner Lindi Schroeder.

“Anita is much better, she is already at her best. It was a good scare, to be honest,” Fuentes told Spanish newspaper Marca.

“I jumped into the water again because I saw that no one, no lifeguard, was jumping in. I got a little scared because she wasn’t breathing, but now she’s fine. She has to rest.”

In a statement on the US Artistic Swimming Instagram page, Fuentes said 25-year-old Alvarez would be assessed by doctors on Thursday before a decision was made on her participation in Friday’s team event.

Juventus have reached an agreement in principle to sign Paul Pogba, according to Sky Italia.

Pogba is a free agent after leaving Manchester United this summer.

It is believed that small details of the contract are being sorted out. It will either be a four-year contract or a three-year deal with an option for a further year.

Pogba will officially sign the contract at the start of July.

The move to Juventus would mark a return to a club where Pogba spent four years before rejoining United in 2016.

Manchester City also made a bid to sign Pogba from their bitter rivals, but the player opted against it and has now gone back to Italy.

The LaLiga fixture list for the 2022/2023 season was released by the Spanish Football Federation (RFEF) on Thursday.

Real Madrid will open their campaign with a trip to newly promoted Almeria, while Barcelona are home to Rayo Vallecano.

The two rivals will face off in the first Clasico on the weekend of October 16.

The game on Match Day 9, will be played at Madrid’s Santiago Bernabeu stadium, with the return fixture at Barcelona’s Camp Nou taking place on the weekend of March 19, 2023.

Atletico Madrid, who finished third last season, begin the season away at Getafe while Sevilla, who finished fourth in the final Champions League spot, will travel to Osasuna.