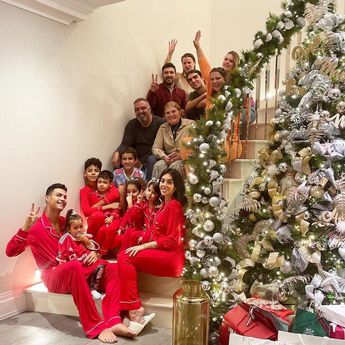 Cristiano Ronaldo’s mum has been applauded by eagle-eyed fans of his boyhood club after appearing to make sure a gift bought from Sporting Lisbon’s club shop took pride of place under his Christmas tree.

Doting Dolores Aveiro, 67 on New Year’s Day, has made no secret of the fact she would like her son to make an emotional return to the team he left to join Manchester United first time round.

She regularly posts pictures of her watching her favourite Portuguese club with family and friends on social media and confessed on a recent podcast: “I’ve already told him: ‘Son, before I die I want to see you return to Sporting.”

On Monday, Dolores was being congratulated for her choice of presents by Sporting fans.

The green bag with the initials SCP – short for Sporting CP – was top of the pile of presents Cristiano and his family were pictured with as they wished his 381 million fans ‘Merry Christmas’.

The majority of the Ronaldo clan were all donning matching red pyjamas as they got into the Christmas spirit.

Mum-of-four Dolores was among relatives who shared the same snap on their social media.

One of the perceptive Sporting fans who picked up on the gift wrote on Dolores’ Instagram, assuming it was a football shirt: “You’ve still got to tell us who the top was for.”

Another joked: “What a beautiful present I can see under the Christmas tree!”

Dolores previously admitted on Sporting Lisbon podcast ADN de Leao in September she had asked her footballer son to return to the club where he began his senior club career before signing for Manchester United in 2003 aged just 18.

She has also claimed that if Cristiano doesn’t end up there, her grandson Cristiano Jr will.

Dolores has revealed in the past she thinks her grandson is better aged 11 than her five-time Ballon d’Or winning son was at that age.

Last month she cheekily reposted a photo to her Instagram story of her celebrating Sporting Lisbon’s 3-1 win over Borussia Dortmund in the Champions League and wrote: “Only you needed” in an apparent message to the Man United striker.

Inside Neymar’s stunning new £2.5m mansion with lift between floors and 20-car garage

Mohamed Salah’s new £400,000-per-week salary at Liverpool has made him the top earner in the Premier League, according to Daily Mail.

The Egyptian has ended speculation about his future, by putting pen to paper on a bumper deal until 2025.

Salah is now ahead of Cristiano Ronaldo (Manchester United) and Kevin De Bruyne (Manchester City), who are on reported salaries of £385,000-per-week.

Salah, however, ranks as the fourth highest-paid footballer in the world.

The 30-year-old’s wages is dwarfed by those ahead of him, all of whom play for Paris Saint-Germain.

Lionel Messi took a pay cut when he joined PSG from Barcelona last summer, but he’s still on a stunning salary of £960,000-per-week.

Messi was the biggest earner in the world until a few weeks ago, when he was overtaken by team-mate Kylian Mbappe, who signed a new three-year contract with the Ligue 1 side reported to be worth £1million-per-week.

The Argentine captain failed to live up to expectations, scoring just 11 goals from 34 games across competitions for PSG.

The seven-time Ballon d’Or winner, though, has shown signs of a revival over the summer.

Messi was outstanding for La Albiceleste in the last few games, scoring goals for fun and winning the Finalissima.

However, it appears PSG have run out of patience with Messi.

This claim was made by respected Journalist Ben Jacobs.

According to Jacobs, Arsenal have ‘put in a heck lot of work’ to secure a deal for the Belgium international.

Speaking to GiveMeSport, Ben Jacobs was quoted as saying: “Arsenal have put in a heck of a lot of work into Tielemans.

“They have agreed personal terms, and their talks with Tielemans date back for the best part of a year. But for whatever reason, Arsenal have decided not to swoop just yet and actually table a bid with Leicester City.

“And if they do so, and agree a fee at the lowest end £25 million, at the highest end £32 million, they will get Youri Tielemans.”