A Federal High Court in Lagos on Friday barred the National Assembly from issuing a bench warrant against the editor of The Nation Newspaper, Mr. Gbenga Omotosho.

The Senate Committee on Ethics, Privileges and Public Petitions had in a letter dated August 5, 2015 threatened to invoke Section 89(1)(d) of the 1999 Constitution against Omotosho if he failed to willingly come before it to answer questions on a news features story published in the newspaper on July 30, 2015.

The said story over which the Senate committee summoned Omotosho was titled “Motion: 22 APC Northern senators working against Buhari.”

Omotosho and the reporter who filed the story, Imam Bello, were directed “to appear before the committee unfailingly to prove the authenticity of your allegation” on August 11, 2015.

But on Friday, the applicants, who considered the senate invitation as an infringement on their fundamental right to freedom of expression under Section 39 of the 1999 Constitution, appeared, through their lawyer, Wahab Shittu, before Justice Mohammed Yunusa, seeking to restrain the National Assembly from issuing a bench warrant to compel their appearance for interrogation.

Shittu, while moving the ex parte application, contended that Section 88 and 89 of the Constitution, which the National Assembly relied upon, did not confer any power on it to summon Omotosho, Bello and the publisher of the The Nation Newspapers, Vintage Press Limited, to answer any question.

Shittu, who maintained that The Nation got the information published in the story from competent sources, both formal and informal, argued that the newspaper was protected by law to conceal the identities of its sources in keeping with the ethics of journalism.

He argued that rather than summon the applicants, the only available option opened to the National Assembly was to sue the applicants for libel or slander if it thought that it had valid claims.

“My Lord, the right of the applicants to freedom of expression and the press, guaranteed under Section 39 of the Constitution, is about to be or threatened to be infringed upon except Your Lordship intervenes very decisively and quickly.

“My Lord, if the respondents have any cause to challenge the content of the story, they can go to court and sue for libel.

“Section 88 and 89 of the Constitution that they are purportedly relying upon to summon the applicants does not give them any power to take any step against the applicants,” Shittu argued.

Urging the court to grant the application, he said the applicants risked being ridiculed except the court intervened.

Yunusa, after listening to Shittu,  said, in a bench ruling, that he found the application to be meritorious and therefore restrained the National Assembly from issuing a bench warrant against the applicants pending the determination of the main suit.

He subsequently adjourned till August 28, 2015.

The authorities of the Federal High Court in Abuja have soft-pedaled on the stringent conditions imposed on the trial of the leader of the Indigenous People of Biafra, IPOB, Nnamdi Kanu.

Against their last month decision, the court authorities have stopped the movement of the trial to the Code of Conduct Tribunal, CCT, at Jabi District of Abuja.

Also, the authorities of the Court have permitted the media to witness the treasonable felony charges brought against the Biafra nation agitator by the Federal Government.

At the time of this report, fully armed operatives of the Department of State Services (DSS), have taken perfect control of the security situations within and outside the court premises.

Journalists, lawyers, litigants, as well as workers are being allowed into the court premises unhindered after formal introduction and presentation of identity cards.

The court had last month issued a Practice Direction which moved the trial to CCT believed to be large and spacious enough to accommodate the crowd that usually surged to witness the trial.

The Practice Direction endorsed by the Chief Judge of the Court, Justice John Tsoho had also prohibited media coverage except where expressly permitted.

However, it was observed that the stringent conditions have been jettisoned.

Although, reasons for deviating from the Practice Direction have not been made known, it was gathered that Jabi Code of Conduct Tribunal was considered too porous for such a sensitive trial, especially from the security points.

Apart from unhindered access being granted to lawyers and media practitioners, roads leading to the court are not blocked, while food vendors are also having their businesses done without molestation.

However, adequate security measures are being observed to prevent security breaches. 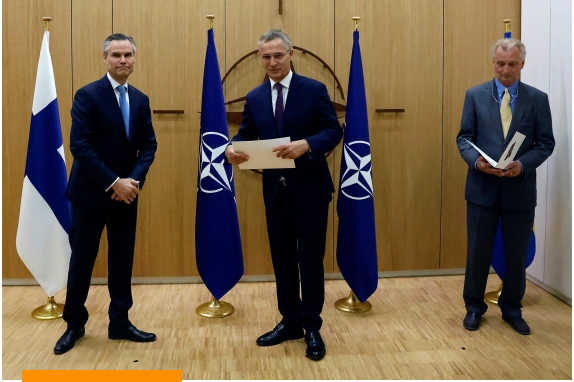 NATO Secretary-General Jens Stoltenberg says that Finland and Sweden have officially applied to join the world’s biggest military alliance, a move driven by security concerns over Russia’s war in Ukraine.

“I warmly welcome the requests by Finland and Sweden to join NATO. You are our closest partners,” Stoltenberg told reporters on Wednesday after receiving their application letters from the two Nordic countries’ ambassadors.

“This is a historic moment, which we must seize,” Stoltenberg said at NATO headquarters in Brussels.

Neutral throughout the Cold War, the two countries’ decision to join the alliance is one of the most significant changes in Europe’s security architecture in decades.

The applications must now be weighed by the 30 member countries. That process is expected to take about two weeks, although Turkish President Recep Tayyip Erdogan has expressed reservations about Finland and Sweden joining.

If his objections are overcome, and accession talks go as well as expected, the two could become members within a few months. The process usually takes eight to 12 months, but NATO wants to move quickly given the threat from Russia hanging over the Nordic countries’ heads.

Canada, for example, says that it expects to ratify their accession protocol in just a few days.

Several NATO allies, most notably the United Kingdom, have offered security assurances to Finland and Sweden during the application period before they are covered by the alliance’s mutual defence pact.

“Over the past few days, we have seen numerous statements by allies committing to Finland and Sweden’s security. NATO is already vigilant in the Baltic Sea region and NATO and allies’ forces will continue to adapt as necessary,” Stoltenberg said.

Facebook and other social media platforms have been cautioned against yielding their platforms to the members of the Indigenous People of Biafra (IPOB) to incite violence and instigate ethnic hatred in Nigeria.

The Federal Government gave the instruction through Information, Culture & Tourism Minister Lai Mohammed at a meeting with a team from Facebook.

In a statement signed by his media aide, Mr. Segun Adeyemi, the minister said since IPOB had been proscribed and classified as a terrorist organisation, Facebook has no justification to continue allowing its platform to be used by the organisation to further its campaign of hate and destabilisation of the country.

Mohammed was quoted as saying: “I have called this meeting to enable us to discuss the increasing use of Facebook by separatists and anarchists, especially those of them based outside the country, to instigate violence and ethnic hatred in Nigeria.

“For whatever reason, they seem to have now chosen Facebook as their platform of choice. And their tools include disinformation, incendiary statements and hate speech.

“They use Facebook broadcasts to reach their followers, who are in thousands. They tag those opposed to their violent ways as ‘saboteurs’ who must be attacked, maimed and killed. They use both English and their local language as it suits them.”

He said the actions of the outlawed group have real-life implications, adding: “By purveying hate and inciting violence, people are getting killed while private and public property are being attacked and destroyed. Security agencies and other symbols of government are their choice targets.”

The minister said that despite the numerous complaints to Facebook on the activities of IPOB, nothing has been done by the company to curtail the group’s excesses on the social media platform.

He said: “Our social media people have been monitoring these separatists, anarchists and purveyors of hate, and have been reporting their atrocious actions to Facebook, but all they get are default responses that their complaints have been received and are being looked into.

“Most often than not, nothing has been done about such complaints… The truth is that whatever Facebook is doing to check these people is mere tokenism and is totally ineffective.”

Mohammed said the government would be monitoring Facebook and other platforms closely in the days ahead to ensure compliance with the demand, as it steps up the campaign for the responsible use of social media.

He said: “We have always advocated a responsible use of social media, and consistently called on all stakeholders to join us in achieving this. Some have tagged our efforts as an attempt to stifle social media.

“They are wrong, because we have no intention of preventing Nigerians from using social media responsibly. All we have been advocating is a responsible use of social media,” the minister said.